Sports and Entertainment Marketing for the Win

For the THIRD year in a row, our Sports and Entertainment marketing class won top honors in the Atlanta Hawks Sports Marketing Competition! Way to go, guys! Any victory of this caliber is impressive, but three years in a row is something to CELEBRATE!!

One hundred schools from Georgia, Alabama and South Carolina submitted presentations. The Hawks organization chose the top 5 schools to present their marketing plans at Philips Arena.

Our students delivered a fantastic pitch in front of 2000 students, faculty, and members of the Atlanta Hawks enterprise. 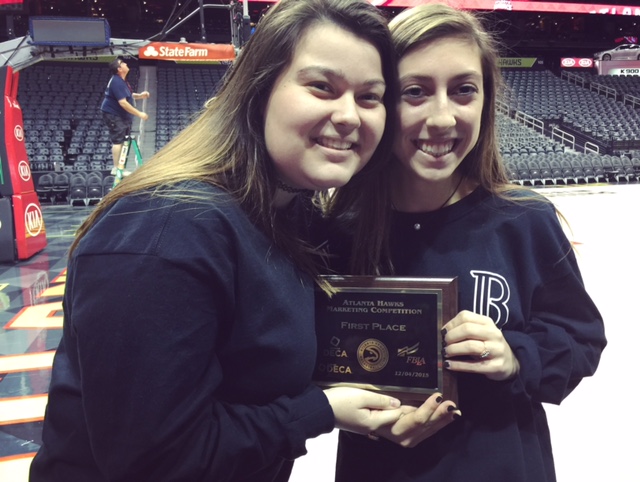 Each year the competition has become more difficult as schools have increased the quality of their projects, basically just trying to keep up with us!

In addition to the main presentations, students were given an opportunity to compete in impromptu marketing challenges. In these mini-competitions, our students were given 20 minutes to develop a social media campaign or concert promotion.  Rachel Hemmings and Anna Rose Goldman won 1st place and $500 for their #HawksJams campaign. Wesley Tillman, Jack Jenkins, and Fate Amos won 2nd place for their Future Hive Concert Promotion Strategy.

What a remarkable accomplishment for this team of Brookstone kids!!!

Even before this year’s victory, Brookstone’s reputation for excellence and innovation had made an impression on the Atlanta Hawks organization, which led to an invitation on the court for our basketball team! How awesome is that!?

So in just one short week, our varsity basketball team will have the privilege of playing Irvin County High School in a exhibition game before the Hawks play the Detroit Pistons at Philips arena. Tickets are available by clicking here!

Again, a resounding congratulations to the Sports and Entertainment Marketing class for all of your hard work, collaboration and on-the-spot creativity. Y’all are amazing and we are very proud!