There are a lot of reasons I love Brookstone.  Lots.

But the experiences Brookstone has given to my children – those top the list.  Those are the reasons we choose to send our kids to Brookstone.

So allow me to share the experience my son had last week at the All American High School Film Festival.  I beg forgiveness ahead of time if I sound like an exceedingly proud parent.

Last spring, I wrote about my son’s Studio Productions class.

This year, as a junior, he was asked to take Advanced Film, along with five other select students.

This was no ordinary class.  This was a competition.  Based on the work that those students did in Studio Productions, and to their most awesome teacher’s background in the film industry, they were invited to compete in the All American High School Film Festival Invitational.  Only ten schools in the NATION were invited to participate.

This competition involved shooting, editing and producing a short film from start to finish in just 72 hours. In New York City.

Over the course of the summer and throughout the first few months of school, they worked and worked and worked on a script, finalizing story lines, auditioning actors, scouting locations via the internet and prepping for shots in New York, all while sitting in their classroom in Columbus, Georgia.

They departed bright-eyed and bushy-tailed on Tuesday, October 6th, ready to take on the challenge.

They started filming at 5:30AM the very next morning and did not stop for nearly five solid days.

Filming on the streets of NYC! 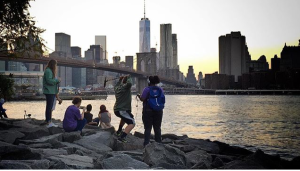 Filming at the Manhattan Bridge

Sleep was a luxury they did not have time for – as evidenced by the very sleepy faces pictured below.

I won’t go into all the details of the experience, because it’s not my experience.  I have only lived it through photographs and the stories my son has shared – the work, the exhaustion, the exhilaration, the complete and total “cool-factor.” I am bursting with pride and excitement for them all.

There is no other educational experience in my child’s life that has been as meaningful or as profound. And no other school could have given it to him. No other school would have worked together to make this happen for these kids.

Teachers that were gracious with make up work.  (They missed almost a WEEK of classes! Bless you all!!!)

Coaches that were unbelievably kind to them as they missed practices and games.  In my son’s case, it was the biggest football game of the season thus far.  His presence was missed and his coaches and teammates were the epitome of grace and support.  They didn’t have to be.  They could have just as easily made him choose.  But that’s not what Brookstone is.  That’s not what we do to our students.  We make every effort to allow our students to be more than one thing –  more than “just” an athlete, more than “just” a student, more than “just” an artist.  If you can’t explore those opportunities in high school – when else in LIFE are you supposed to have the chance?

Our students were competing with large technical magnet schools from across the country – high schools that actually specialized in film!  Some had teams of 20 students in this competition! And here were our five Brookstone students – a variety of people and personalities – having had only one semester of film experience before.  Wow. What they accomplished is amazing.

Maria Reed, their most awesome, most unbelievable teacher, calls them the Breakfast Club. It’s a good analogy. Five different people with very little in common except for this one experience, which has now bonded them tightly.

And they are changed kids, too.  They are confident, resilient, and able to handle some pretty major pressure. Not only handle it, but persevere through it. Some big mistakes were made, deadlines almost missed (we’re talking 15 seconds later and they would have been disqualified!) But what they learned…life changing.

I asked my son specifically what he learned throughout all of this.  I asked him to give me two big take aways.  And here they are:

He learned other things, too, of course –  shooting, editing, navigating an unfamiliar city. But learning to adapt and learning to work with others – those are skills that will last him a life time. Learning to make a movie is almost irrelevant.

Except that making a movie is really cool. Walking the “red carpet” and being interviewed by MTV is pretty cool. It’s just not your normal day for a high school student in Columbus. So for a brief moment, these guys reveled in the spotlight, enjoying the fruit of their labor and seeing all of their hard work pay off. 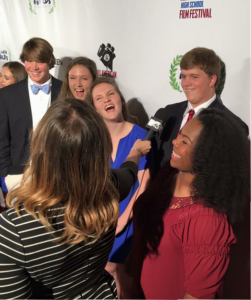 What an experience. They didn’t win the competition, but they still won.  As my son said, “We made a movie from start to finish in 72 hours that was played before an audience in the busiest movie theatre in the nation.  That’s pretty much enough for me.”